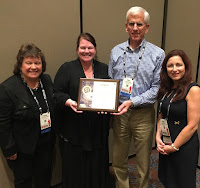 The award was presented Sunday at the SPJ National Convention in New Orleans.  It’s the second time in three years that the chapter has earned the honor.

National SPJ President Paul Fletcher cited the chapter’s planning and production of a joint
Region 4/Region 5 conference in Cincinnati in April as one of the reasons for the award.

The conference featured a dozen programs on current topics of interest to 200 professional and student journalists who attended at the Kingsgate Conference Center.

The highlight was a super session discussion on securing and using police video in officer-involved-shooting situations.

The program focused on how the media portrayed the shooting of Sam DuBose by University of Cincinnati Police Officer Ray Tensing.

Mentoring the next generation of student journalists is also a key part of the chapter’s mission through a series of “Lunch With The Pros” at the University of Cincinnati and Northern Kentucky University.

Those forums focus on topics of interest to student journalists.  The SPJ pro chapter provides panelists for the lunch along with free pizza for the students.

Anyone who is not an SPJ member and would like to join can sign up at www.spj.org.