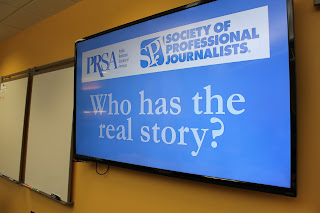 Truth matters, facts matter, fake news and covering President Donald Trump may not sound like issues that belong together.

They're the important topics discussed in public forums sponsored or co-sponsored by the Greater Cincinnati Professional Chapter of the Society of Professional Journalists in the first months of 2017.

The expenses have been minimum, but the reach, reaction and impact have been phenomenal.

The chapter continues to reach out to engage the public in discussions about the importance of a free press, ethical reporting and presenting thorough, fair and unbiased stories.

Here's a rundown of the programs and how they were produced. 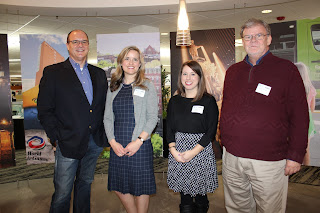 The  chapter has for years partnered with PRSA on programs that help members of both organizations understand the other's purpose and goals.  One point person from each chapter starts the planning process by picking a topic of interest.  The topic gathering focused on "Fake News."  Two members of the media and two public relations practitioners formed a panel discussion moderated by an SPJ member.  There was a charge for the noon-time affair to cover the cost of lunch and other expenses.  Reservations were handled through EventBrite.  Promotion was handled independently through both organizations.  The sold-out forum drew 35 people and was held in the offices of a downtown Cincinnati PR agency.  This is a partnership that will continue well into the future to take advantage of the strengths of each organization.  Proceeds from the luncheon were split between the two chapters.

This began as a simple idea — have a breakfast program to talk about the issues surfacing on how to adequately and properly cover the administration of President Donald Trump.  A media lawyer in one of Cincinnati's bigger firms offered their presentation center for free for the program.  A panel was recruited consisting of  a moderator, a print reporter, broadcast reporter, media attorney and a representative of the Democratic and Republican parties.  SPJ handled all promotion through e-mails and social media postings.  A continental breakfast was provided by the chapter for a cost of around $250.  The 8:00 to 9:15 a.m. program was free and drew 35 people.

It's amazing what a simple conversation can start.  One of the SPJ board members was talking with a board member from the Voice of America Museum about a possible program about truth and facts in reporting.  One thing led to another and the VOA board member reached out to the SPJ chapter president.  Quickly a panel was picked and a date set for the program  The panel consisted of an SPJ moderator, two print politics reporters, a radio politics reporter, and a college electronics media professor.  The VOA board handled all promotion and invitations.  The SPJ chapter had no expense whatsoever.  The event drew 85 people, including more than a dozen high school journalism students.  Every member of the audience was highly engaged throughout the 90-minute forum.

This is in addition to the chapter's continual mentoring of the next generation journalists through programs called "Lunch With The Pros."  Students in SPJ chapters at the University of Cincinnati and Northern Kentucky University pick topics of interest to them.  The SPJ chapter then finds panelists that fit that topic and will provide a thorough discussion.  There's pizza provided by the SPJ chapter to increase the attendance at each event.  There are six programs each at UC and NKU with the cost of pizza per luncheon around $50 to $75.  The chapter gets funding for this effort through a grant.  Any chapter can begin a program of this type.  It's quite easy to put together, the cost isn't that high and the return is priceless.

Good ideas, a strong board and a willingness to provide programs that reach journalists and members of the public are the reasons the Greater Cincinnati Professional Chapter of the Society of Professional Journalists succeeds in fulfilling its mission.