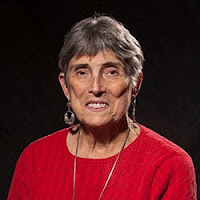 Jo-Ann Huff Albers will be the special guest at Cedar Village on Thursday, January 18 for the Third Thursday luncheon series. She will address "Real vs. Fake News" during the program.

Cincinnati SPJ Board President Ginny McCabe and Board Member Emil Dansker will also be in attendance for the luncheon.

About Jo-Ann Huff Albers
Jo-Ann Huff Albers, 80, retired founding director of the WKU School of Journalism & Broadcasting, worked for The Cincinnati Enquirer for 20 years in various capacities. Her final title there was Kentucky executive editor. Between leaving The Enquirer in May 1981 and coming to Bowling Green in May 1987, she was editor and publisher of Sturgis Journal in Michigan and Public Opinion in Chambersburg, Pa., and Gannett general news executive, working with Gannett News Service and USA Today.

She is a writing coach for the annual Mountain Workshops held by the WKU photojournalism program, edits the weekly bulletin of the Lockland Church of Christ, serves on the board of Cincinnati Pro Chapter of the Society of Professional Journalists and the communications committee of Woman’s City Club of Greater Cincinnati for which she does copyediting on its bulletin and website, and on Friday mornings reads news and opinion pages of The Enquirer on the radio for the blind. She was a 2016-17 member of The Enquirer’s Publishers Advisory Board. A member of the Journalism and Women Symposium, she has attended all but two JAWS camps since the late 1980's.
She is a past president of the Ohio Newspaper Women’s Association and national Women in Communications Inc.

For more information about Cedar Village and the Third Thursday program, visit http://cedarvillage.org/thirdthursdays/