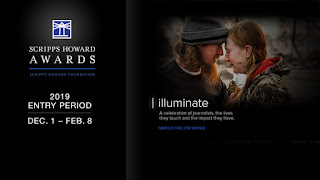 CINCINNATI –The Scripps Howard Awards, one of the nation’s most prestigious journalism competitions, will accept entries from Dec. 1 to Feb. 8 for reporting and storytelling during 2019.
The 67th Scripps Howard Awards competition will present $170,000 in prize money for work across 16 categories. The awards will be presented on April 16, 2020, with a live show hosted by Miguel Almaguer, NBC News national correspondent.
With a focus on high-impact reporting, the awards recognize journalism that spurs action, news organizations that go the extra mile to expose previously undisclosed or misunderstood information and journalists who embrace new approaches to provide more immersive experiences for their audiences.
Categories include Visual Journalism, Investigative Reporting, Breaking News and Community Journalism, and this year’s Topic of the Year category is “The Impact of Climate Change on Communities.” The third annual Impact Award recognizes journalism that serves the public through coverage of an issue leading to changes in the public, private or business sector.
The Scripps Howard Awards honor work from television stations, networks, radio and podcasts, visual media, online media outlets, independent producers, newspapers and print publications.
“Each year, the Scripps Howard Awards launch a search for the best in American journalism in order to bring awareness to the important role of journalists in our society,” said Liz Carter, president and CEO of the Scripps Howard Foundation, which administers the Awards. “As media continues to face threats to both the safety of its journalists and the stability of its financial models, it’s imperative that we pay tribute to journalists who shine a light and shape our world.”
Last year’s winners represented an unprecedented number of newsroom collaborations, with a joint reporting project claiming the Impact Award. “Implant Files,” a collaboration of the International Consortium of Investigative Journalists, NBC News Investigative Unit, The Associated Press and more than 50 media partners took home the award after also winning in the Business and Financial Reporting category for an investigation into the medical devices and implants industry. Other 2019 winners included Vice News, South Florida Sun Sentinel, The New York Times, ProPublica, National Geographic and The Knoxville News Sentinel.
Finalists will be announced on Feb. 25, with winners announced on March 3. The awards show will be held at historic Memorial Hall in Cincinnati on April 16.
Keep up with the latest news on the Scripps Howard Awards through Facebook and Twitter, and find out more about how to enter at shawards.org.