The names Videolicious, HootSuite and SoundCloud aren't part of some newly created language.


They're among new tools available for journalists worldwide working in the digital age.


That's according to Doug Haddix and Kevin Smith of the Kiplinger Program in Public Affairs Journalism at The Ohio State University in Columbus.


Haddix and Smith presented what they called their "Digital Dirty Dozen" during the Excellence In Journalism 2014 (EIJ14) conference in Nashville.


EIJ14 was a three day gathering of members from the Society of Professional Journalists (SPJ) and the Radio TelevisionDigital News Association (RTDNA).


The pair researched hundreds of offerings to come up with their list, which was presented to over 100 conference attendees.


Reporters can record notes that are translated into text and can be e-mailed.


This is a search engine for public posts that Haddix says "will rock your world."  It'a a free mobile app.  When location services are turned out, you'll be shown the public comments being sent around you.  That includes Twitter, Facebook, Instagram and Google+.  Reporters can also type in the name of any city to check what's being posted.


This is an "editor in your pocket" that helps walk the user through story development.  It's seen as a good tool for young reporters to see what's missing in a story and what sorts of questions need to be asked.


The free version allows the user to monitor up to five different platforms.


People can be tracked, posts can be scheduled down to the minute and the site includes built-in analytics.


Allows the recording of quality sound from iPhones that shareable via the cloud.   It enables precise editing.


There's a $10 charge and it's iOS compatible, but it's great for capturing interviews and sound.  It's described as sophisticated, but containing easy editing features.


This is a secure, web-based item that you don't need to know programming to set up.  It's housed in Google drive.  The infomation is fed into a master spreadsheet that can also be transferred to Google maps.


This is for Apple iOS7 operating systems.


This is the doorway into 113,000 data sets that can be pulled up by category or location.  It's an excellent place to go for data on comparison stories.


This allows editing on a phone, tablet or laptop.  It's described as fairly simple to use for editing clips that are no longer than one minute.


This connects directly into Google and allows point or heat maps to be created and sent directly to web sites.


"This is the perfect tool for journalists," according to Haddix and Smith.


This saves, analyzes and exports tweets before they vanish.  Three archives cost $15 a month and there's a one month only fee of $20 which covers special events.


n addition, Haddix and Smith said they were very impressed by the


Internet Public Library, which is run by a consortium of public libraries.


Background information can be organized by topics or keyword searches. 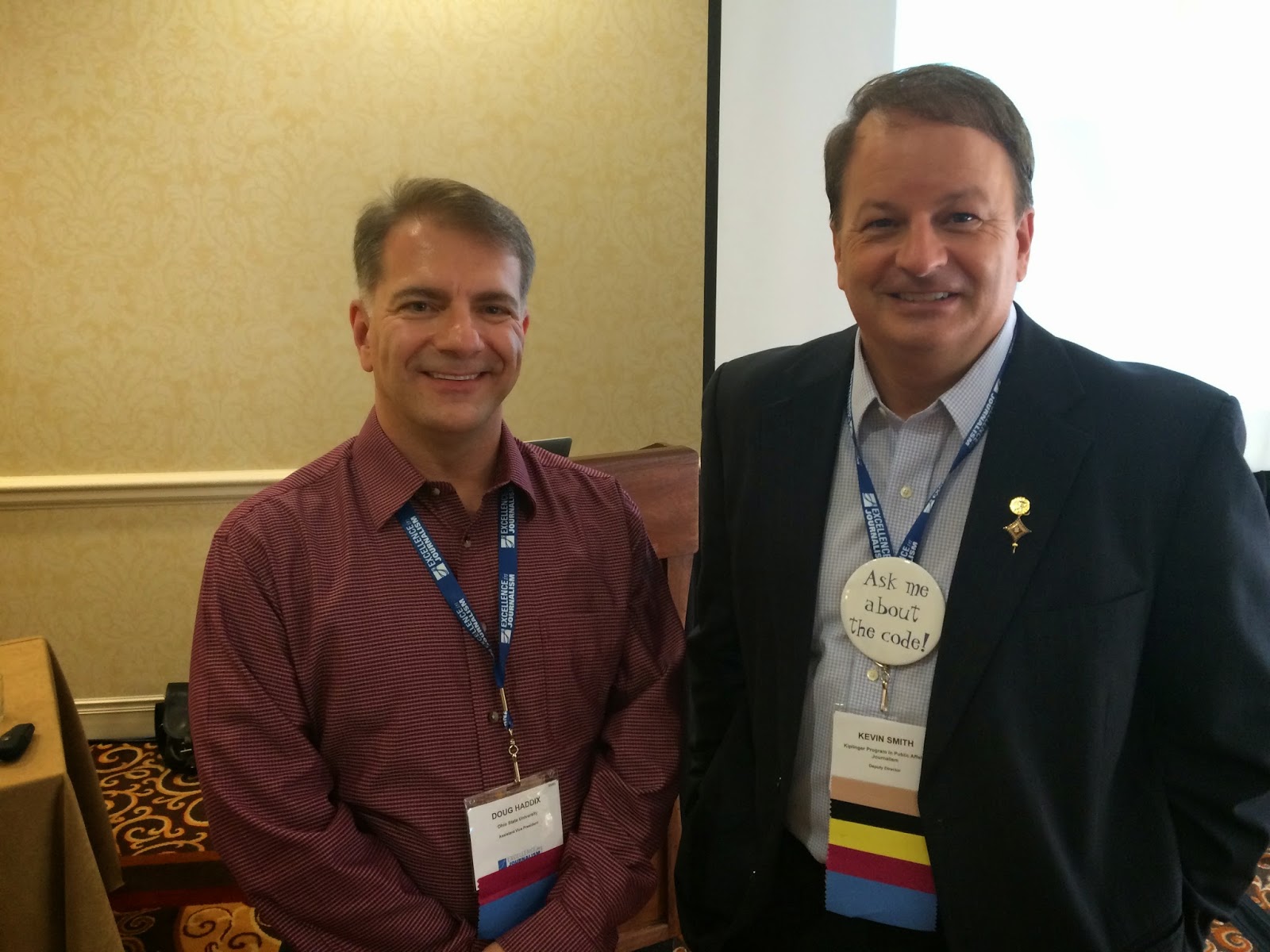 (Pictured: Doug Haddix and Kevin Z. Smith of the Kiplinger Center for Public Affairs Journalism at The Ohio State University in Columbus.)