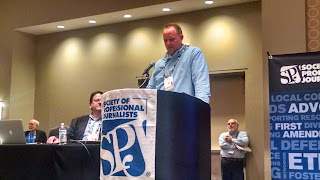 Imagine being arrested on felony charges simply for making a public records request. While it sounds like something from a science fiction movie, it actually happened in Georgia.

The Society of Professional Journalists (SPJ) made it a point to step in and help defend the public’s right to know.

Mark Thomason, publisher of the Fannin Focus in Blue Ridge, Georgia, was charged with three felonies, including one for making a false statement on his public records request.

Thomason spoke to SPJ delegates during the Excellence in Journalism 2016 convention in New Orleans and they approved a resolution commending him.

The case stems from Thomason asking for court reporter audio to confirm whether a racial slur had been uttered by Superior Court Judge Brenda Weaver.

The request was denied several times and Thomason wrote about it.

Thomason got a tip that a judge who stepped away from the case paid those fees with public funds.  He made Foia requests for copies of the checks “that could have been cashed illegally” and statements.

That set of a firestorm and chain of events that resulted in thomason being arrested and spending two nights in jail.

The Georgia Pro SPJ Chapter got word of what was going on and notified the national office for assistance. The case is still in the courts.

Judge Weaver is still on the bench, but the SPJ resolution calls for her to resign.

“I am here today because of SPJ,” Thomason said. “I don’t know how the story would have ended if word hadn’t gotten out.”