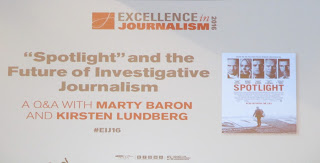 There is a great deal of investigative reporting going on in the country right now, but more is needed to keep the public informed.

That was the message delivered by Marty Baron to journalists from across the country during the Excellence In Journalism ’16 Convention in New Orleans.

Baron was the Boston Globe’s Editor when the paper’s Spotlight Team published an exhaustive series of stories about Catholic priests sexually abusing children and the church covering it up.

The effort began modestly with a single column that raised questions about one priest abusing eight children.

However, Baron said that led to more questions about what church leaders knew, when they knew it and whether it was policy and practice to cover things up to let priests abuse kids again and again.

A total of 600 articles were published the first year and 900 by the time a year-and-a-half had elapsed.

Baron said the work was the result of timeless investigative traits including…
“Every reporter should be an investigative unit,” Baron said.  “You have to be willing to go to places where you’re not wanted.”

“We need more of the work that differentiates us from everyone else,” he added.  “Work hard to make it authentic."