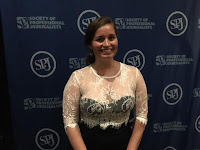 Thinking outside the box will be the rule, not the exception, for Lynn Walsh over the year.

Walsh was inaugurated Tuesday as the new President of the Society of Professional Journalists, (SPJ) capping the organization’s convention in New Orleans.

“Journalism has changed and I want SPJ to change with it,” she said.

Goals for the upcoming year will focus on freedom of information legislation, ethics, diversity, fairness and accountability.

“We need to protect the right of the public to get information,” Walsh added.

The outcome of the presidential election will go a long way toward determining whether that will happen and Walsh said she is concerned about the possible impact.

“The result will most likely be chaos,” she said.

However, that will present opportunities for SPJ to step in in its role of protecting the first amendment.

“We need to be proactive, not reactive,” she said.  “We need to act before someone ends up in prison or in a courtroom.  Too many fights end up in court and that’s unacceptable.

Walsh assumed the SPJ presidency from Paul Fletcher, who served in the position during 2015-2016.