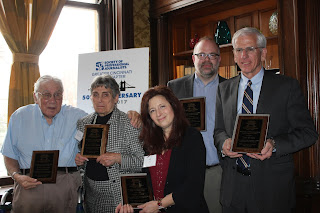 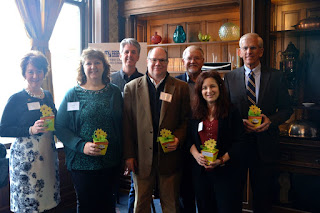 Although snow was falling outside, everyone enjoyed lovely dining room in which a lot of warm, professional memories were being shared.

The celebration kicked off at 11 a.m. with a social hour, followed by luncheon at noon. The program began at 12:30 p.m.  Highlights included a video featuring founding member, Emil Dansker, recognition of past chapter presidents, the keynote from Korte and a special presentation honoring those who have made recent contributions to the chapter, promoting journalism in Cincinnati and beyond.

Past President John Kiesewetter also prepared a display of historic pictures, which captured journalism through the years in Cincinnati.

The Cincinnati SPJ chapter was founded in 1967.  Past Chapter President and Region 4 Director Tom McKee produced a video featuring Dansker, which highlighted some of the chapter’s history.

McKee introduced Dansker’s video by saying, “Let me take you back to 1967 – ‘The Summer of Love,’ The Beatles released their classic album, ‘Sgt. Pepper’s Lonely Hearts Club Band.’ Aretha Franklin was singing about ‘Respect.’ The Doors had a big hit with ‘Light My Fire.’ Sam and Dave were talking about ‘Soul Man.’ Jimi Hendrix was in a ‘Purple Haze.’”

“…That sets the scene for March 10th with a gathering much like this one to mark the founding of The Greater Cincinnati Professional Chapter of the Society of Professional Journalists,” he continued.

Dansker, who was also in attendance, was honored for his contribution to the chapter with a special award, which was presented by Chapter President Ginny McCabe.

President McCabe, Vice President Jenny Wohlfarth and Secretary Corinne Minard also presented service awards to Jo-Ann Huff Albers, Hagit Limor, Tom McKee, honoring them for making significant contributions to the chapter. Korte, a native Cincinnatian, was also presented with a plaque for his efforts in furthering journalism in Cincinnati, Washington and across the globe.

Korte, who was mentored by Dansker, is an Ohio University Graduate, and a former reporter for The Cincinnati Enquirer. Currently, he resides in the Washington D.C. area, and serves as the White House Correspondent for USA Today. Korte’s talk addressed “Journalism in the Age of Trump.”

Past chapter presidents, including McKee, Limor, Patti Gallagher Newberry, Sacha DeVroomen Bellman, Marc Emral, John Fox and Kiesewetter were in attendance. On behalf of the Cincinnati SPJ Board of Directors, McCabe presented the past presidents with a “chocolate bouquet” of Dove chocolates to recognize them. They were also applauded by the crowd of attendees. 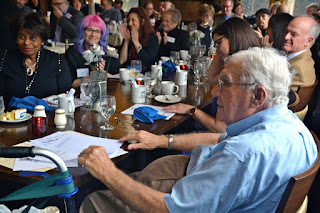 (Dansker - far right - with some of the attendees) 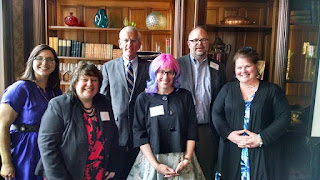