Emil Dansker Obituary - Love and Honor to our Founding Board Member 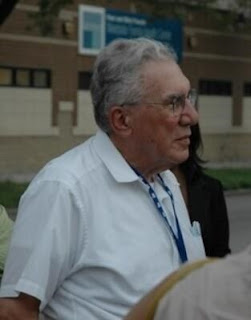 Emil Dansker Obituary
Emil Dansker, 90, of Cedar Village Retirement Community in Mason, Ohio, passed away peacefully on Dec. 5, 2020 after a lifetime devoted to his family, friends, students, and the communities in which he served as a professor and journalist. Emil was born to the late Harry and Fannie Dansker on April 29, 1930 in St. Louis, Missouri, and moved to Vincennes, Indiana at age six. He graduated from Lincoln High School (1948) and from Northwestern University with a bachelor's degree (1952) and a master's degree (1953), both in journalism. He proudly served as a U.S. Marine sergeant at Camp Lejeune on active duty from 1953 to 1955, followed by six years in the reserves. At Camp Lejeune he served at the base newspaper as a combat correspondent and photographer, or as a chairborne commando and paragraph trooper, as he liked to say. He was set to receive a congressional gold medal of for his civil air patrol service during World War II. He will receive it posthumously in the near future. Emil was married to the late Charlene (Applebaum Kaplan) in July, 1956 until her death in 1987. Together they raised three children, Helen Dansker of Bella Vista, Arkansas, Alice ""Ali"" (Michael) Doyle of Vanceburg, Kentucky and Eric (Kathy) Dansker of Rockville, Maryland. Emil married the late Donna (Weber Marmer) in 1990, who passed away in October, 2020. Dr. Dansker is also survived by three grandchildren, , Jennifer (Matt) Mrkobrad, Jeff (Allison) Holman and Ashleigh Dansker, five great-grandchildren, Sawyer and Georgia Holman, and Augie, Orla and Maeve Mrkobrad, three step-children, Amy (Tom) Nice, Julie (Jerry) Kalwat and Ken (Alison) Marmer, their children, and scores of cousins, nieces, nephews, former students, colleagues and friends. Our family also wants to honor our wonderful selfless angel, Ewann Clay, whom we love dearly. Dr. Dansker's legacy remains strong in his professional life as a journalist for various newspapers – including, but not limited to, the Decatur Herald & Review, the Cincinnati Enquirer, the Dayton Daily News, the Toledo Blade, and as co-owner, editor and publisher of the Pemberville Leader. Dansker was advisor to the BG News at Bowling Green (Ohio) State University (BGSU) for several years, and his deepest impact on his craft came from teaching an untold number of students at The University of Cincinnati, Xavier University and BGSU – where he earned a Ph.D. in 1979, and at Central State University. He gave insights into the profession through first-hand accounts of his stories and those of his colleagues, creation of a political convention and Olympics internship program and helping students network for internship and job opportunities. He enjoyed flying, photography, history, and so many other subjects, all of which he approached with zest and unmatched passion for learning and exploration. He was active in several organizations and was co-founder of the Greater Cincinnati Society of Professional Journalists who honored him with a memorable luncheon in December, 2016. Until recent years, Dr. Dansker was active with the Wise Temple. He was a lay rabbi at the former Longview State Hospital in the 1960s and oversaw the only bar mitzvah of a Longview Patient. His tremendous humor and sensational storytelling, his unmatched memory for facts, his love for his family, students and colleagues set an inspirational example for us all, and with love, he will never be forgotten. The family is anticipating a Celebration of Life gathering in Spring, 2021, and we will post arrangements on Facebook. Dr. Dansker will be interred in the columbarium at Arlington National Cemetery at a later date. Special thank you to the staff at Cedar Village and Dr. Scott Kotzin for the wonderful, loving care provided to our father. We appreciate you more than we can express. Memorial gifts can be made to the Greater Cincinnati Society of Professional Journalists, c/o Ginny McCabe, 281 West Crest Drive, Cincinnati, Ohio 45215. Writers' note: to avoid the famous red pen, we researched the contents of this obituary, and apologize profusely in Dr. Dansker's memory if anything is incorrect. We all know how he preached ""Accuracy, Accuracy, Accuracy."" And that's how we do it! www.weilkahnfuneralhome.com
Published in The Cincinnati Enquirer from Dec. 8 to Dec. 9, 2020.
Here's the link to Emil's Obituary: https://www.legacy.com/obituaries/cincinnati/obituary.aspx?n=emil-dansker&pid=197248848&fhid=27761